Out on the extreme western edge of Los Angeles County, beyond the narrow belt of such fashionable celebrity enclaves as Hidden Hills and Calabasas, lies the scenic, sleepy Conejo Valley. When the San Fernando Valley began to run out of land for new housing in the 1960s, real estate developers began to look farther afield for places to plant their subdivisions and cul-de-sacs. One of those developers was shipping magnate Daniel Ludwig, whose American-Hawaiian Steamship Co. bought a 12,000-acre ranch east of Thousand Oaks with the aim of developing a massive master-planned community, a “city in the country” that would combine the best features of urban life with the sprawling homes of the suburbs. To give the town a focus, Ludwig’s team dammed a nearby creek to create a 157-acre lake with nine miles of pricey shoreline real estate. Because the new lake was west of Los Angeles, it was named “Westlake.” The “Village” was added later to avoid confusing it with the L.A. neighborhood of the same name. With plenty of hiking and horseback riding trails, and with Malibu’s beaches just a few miles away, Westlake Village offers a wealth of activities for outdoor enthusiasts. There are few places in Southern California where you can go yachting on a private lake and follow that up with a round of golf at one of three nearby courses. Westlake Village is one of them. 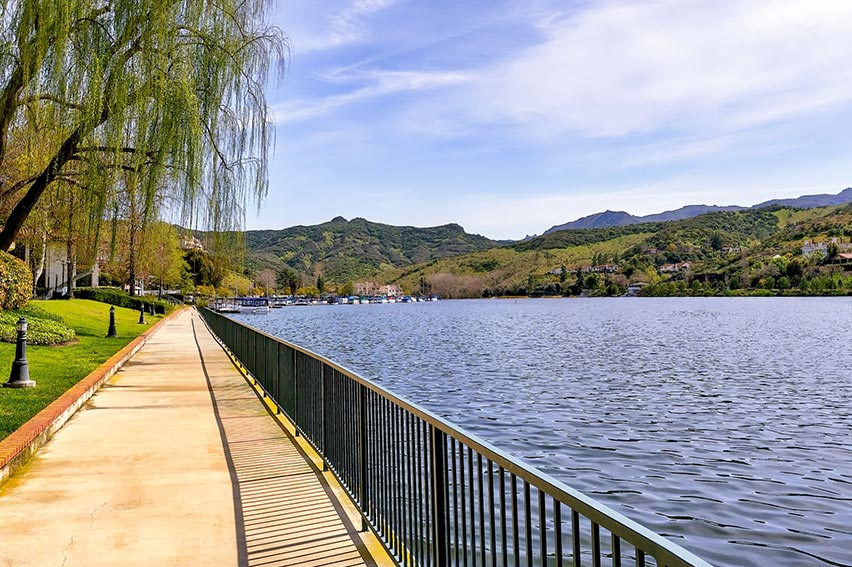 Westlake Village is split into two ZIP Codes. South of the 101 Freeway, 91361, the median sales price in September for single-family homes was $1.251 million, according to CoreLogic. That’s a 37.7% increase in median sales price year over year.

North of the freeway, 91362, saw a median sales price of $945,000 based on 38 sales, which was a 0.1% decrease year over year. Overall this community offers a small town charm with many amentias and activities.