Calabasas is located south-west of the San Fernando Valley and north of the Santa Monica Mountains. Calabasas is situated near, adjacent or around Woodland Hills, Agoura Hills, West Hills, Hidden Hills, and other highly sought after neighborhoods in the area.

Why is Calabasas Real Estate so valuable?

Looking strictly at the numbers, Calabasas like the other “Hills” communities near it have benefited from an ever-increasing home valuation for its residents. Year after year, home values increase. Furthermore, Calabasas is home to many celebrities and for a reason. Not only does Calabasas offer one of the best school districts in the country but it also offers its residents everything you can possibly need – no wonder Calabasas real estate rises year after year. To the south you have easy access to the beach. In town, you have a beautiful array of restaurants, malls and some of the best hospitals. Around it are some of the best cities in the state. And finally, Calabasas offers proximity to the city but it also provides a lush natural landscape in nearly every direction you look. 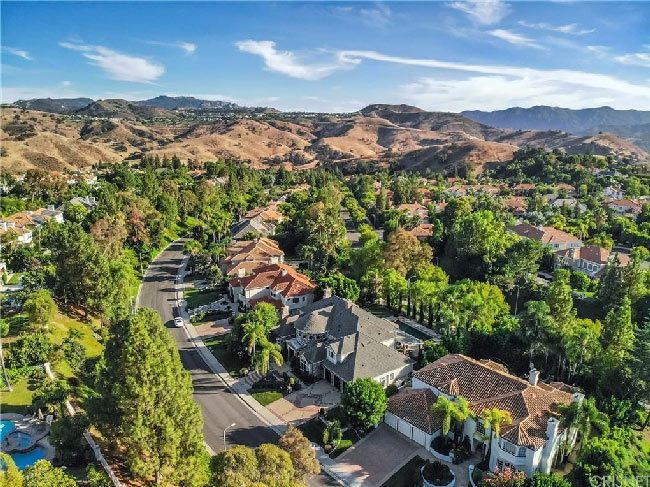 You can’t think of Calabasas real estate without thinking about The Leonis Adobe, an adobe structure in Old Town Calabasas that dates from 1844 and is one of the oldest surviving buildings in greater Los Angeles. The iconic building is a real estate wonder of the world and it’s right here in what many people consider to be one of the best areas for families in the state.

It is generally accepted that Calabasas means pumpkin, squash, or gourd, derived from the Spanish “calabaza”. Some historians hold the theory that it is merely a translation of the Chumash word “calahoosa”, but since that also refers to some type of gourd, it only matters to linguists. Whatever the derivation of Calabasas, it’s the history behind its real estate that really stands out.

Nearly two hundred years ago, a ranch known as The Scorpion or “El Scorpion” was given in a real estate arrangement to three Native Americans. A quarter of a century later, however, Miguel Leonis inherited it along with its a thousand plus acres after marrying a Native American whose father owned the land. This ranch would serve as the foundation for Calabasas in the years to come. And it all started with a Real Estate deal.

Today, the City’s official logo, depicting the red-tailed hawk flying over the Santa Monica Mountains, symbolizes a commitment to preserving the community’s natural beauty and semi-rural quality of life.  The City logo is featured on the Calabasas City flag, which is flown in front of City Hall and hangs in the City Council Chambers.

Calabasas stands by that meaning as it expands and develops into a larger community over time but all the while maintaining the beautiful nature around it.

Calabasas real estate is deeply rooted in its history. And Yoav Astman and his team take great pride in continuing that tradition until this day.

23945 Park Belmonte in Calabasas was sold at a neighborhood record-breaking price. Just looking at this property gives you an idea of what Calabasas real estate is like. With 5 stunning bedrooms, 4.5 bathrooms, and every luxury amenity you can imagine – it’s no wonder this home sold for over $3,000,000. The home boasts a pool, a basketball court, art, a wine cellar, a putting area, an incredible view, and a modern and luxurious layout. NOTHING about this home says average or normal.

Yoav Astman and his team managed to sell the home above asking, the same day it was listed and for a record-breaking amount.